How Thousands of U.S. Companies Outperform During Recessions

I’ve witnessed more U.S. business cycles than I care to admit, and with each one I’ve learned that as an economic expansion goes on, smart CEOs begin planning for the next recession.

They pay particular attention to liquidity, tighten up the collection of receivables and give any capital investment proposals extra scrutiny, among other moves. For these leaders, making sure their companies will be around for the next expansion is Job No. 1.

As the jobless and stock market indicators on the chart below show (recessions are shaded in gray), the U.S. is well into its current expansion. We all hope any downturn is years off. But failing to prepare for tough times inevitably makes them only tougher, as we witnessed in the most recent recession. 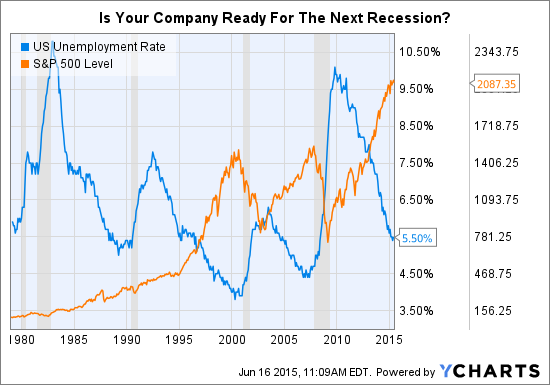 US Unemployment Rate data by YCharts

What else makes a company recession-resistant? One major factor is the presence of engaged and committed employees, and that’s why Employee Stock Ownership Plans, or ESOPs, represent a special category of recession-resistant companies. In a 2010 study of companies owned by S-Corporation ESOPs, compared to the overall economy, the ESOPs during the recession year 2008 were adding employees, while companies overall were slashing payroll; the ESOPs enjoyed double-digit revenue growth in 2008, while overall companies were seeing sales declines.

“Firms organized as S-ESOP’s — Subchapter S firms with an Employee Stock Ownership Plan — performed better in 2008, the first year of the recent recession, than non-ESOPs in terms of retaining jobs and increasing wages and revenues,” the study’s authors, Phillip Swagel and Robert Carroll, reported.

That trend toward out-performance has continued as the U.S. economy recovers. And thus, S-Corp. ESOPs vastly outperformed the S&P 500 for the decade 2002 to 2012, according to a study by EY’s Quantitative Economics and Statistics Practice (QUEST). The employee owned companies delivered their worker-owners an 11.5% compounded annual growth rate vs. 7.1% for the S&P 500 on a total return basis. (The S ESOP return is based on combined distributions and growth in asset values, just as the S&P 500 total return includes stock price appreciation and dividend payments.)

The ESOP out-performance, supported by a wide survey of studies, is due to workers acting like owners. ESOPs enjoy higher productivity, lower worker turnover, an abundance of money-saving ideas from the rank-and-file, and less friction between management and workers. These and other factors make the ESOPs more profitable than comparable companies operating under different ownership formats. And ESOPs are more resilient in difficult economic environments.

Some wisely question whether these statistics merely show that high-performance companies choose to become ESOPs, rather than showing that employee ownership actually improves a company’s operations. Alex Brill, CEO of Matrix Global Advisors, an economic policy consultancy (whose work has at times been sponsored by a pro-ESOP organization), concluded in a 2012 paper that employee ownership, by tying workers’ fortunes more closely to those of employers, actually led to improved performance.

In my own work advising companies, I’ve come to believe that more enlightened managements are indeed more likely to choose to convert ownership to an ESOP. And those companies tend to already have somewhat more engaged employees. But I’ve also watched companies, following conversion to ESOPs, go on to reap additional and significant productivity gains.

Parksite Group, a building products distributor, saw many of its competitors fail during the recession, but its worker-owners pulled together and the company is emerging stronger and with more opportunities. Atlantic Plywood, another distributor, also came through hard times ahead of its competition, thanks to employee initiative and sacrifice. And Central States Manufacturing kept growing during the latest recession, thanks to a remarkably high level of customer service its worker-owners deliver.

For founder/owner/entrepreneur/CEOs heading up middle market companies, an ESOP is in other ways, as well, an attractive exit strategy.

There are significant tax benefits. Selling a C-Corporation to an ESOP, the seller can defer capital gains, potentially forever, by reinvesting the proceeds in qualifying securities, such as stocks and some bonds. That’s a roughly 23.5% improvement in after-tax proceeds, depending on the state you’re in.

Going forward, operating the ESOP as an S-Corp. means the company doesn’t pay federal or most state income taxes; employees pay taxes when they retire or otherwise redeem their ESOP shares, as with other retirement plans. That means more cash to pay down acquisition debt, including seller notes, and to fund expansion and acquisitions.

Founders can participate in the upside of an ESOP by acquiring structured equity – typically part of a package of seller’s notes and warrants. And many CEOs, selling part or all of a company to an ESOP, stay on to run the company.

Recession years — the cutbacks, painful adjustments, deferral of corporate and personal career ambitions — can be divisive, bringing out the worst in people. And that can turn tough times into ugly times. Employee ownership — shared gain in good times, shared sacrifice in hard times — creates a more constructive and cooperative environment at companies. ESOPs, in my experience, out-perform financially and culturally.